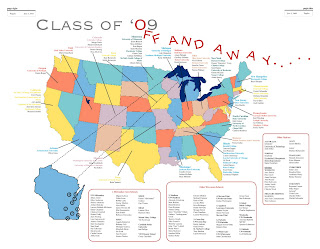 Posted by JenHeyden at 12:33 PM No comments:

The proposals still have a long way to go before going into action. The committee plans to finalize the language that it will present to superintendent Blane McCann, who will then decide whether or not to submit the three proposals to the school board. Finally, the board will choose to go ahead with one or none of the proposals as they cut $800,000 from the 2010-2011 budget in the coming months.

The first proposal, which is estimated to save $395,986, would make Lake Bluff K-4, make Atwater 5-8, close SIS, and leave SHS unchanged. While the committee liked that this proposal preserved the “middle level experience,” members noted that renovations like implementing hallway lockers, a locker room for PE classes, or even larger bathrooms might be needed in Atwater.

However, “if we’re going to do anything it’s going to be in the minor remodeling mode rather than the major remodeling mode,” said Dean Schultz, interim co-director of instruction and committee facilitator. High remodeling costs could eat up any savings gained from reorganizing.

The second proposal, estimated to save $343,487, would make both Lake Bluff and Atwater K-6 schools, close SIS, and incorporate seventh and eighth graders into the high school. Committee members liked that the two elementaries would remain unchanged and would require no renovations.

However, they were less happy with the idea of having seventh graders and seniors in the same school.

“That scares me as a parent,” said Jay Sorenson, who has a child at Lake Bluff.

Furthermore, the logistics of fitting so many kids in SHS would be tricky. Although SHS principal Matt Joynt said that SHS was originally designed for grades 7-12, he joked that there might have to be “kids on the roof” with this proposal. Teachers would likely be unable to have prep periods in their classrooms, as almost every room would be used almost every hour of the day.

The committee also debated whether or not the seventh and eighth graders would be kept separate from the rest of the high school. That decision, along with the finer points of any reorganization, would likely be ironed out by another committee after the school board makes their choice.

“If you give [seventh and eighth graders] a full high school experience, it would be a lot easier and a lot cheaper,” Joynt said. He also pointed out that “this campus was built for student travel between buildings, not to lock off two floors and not travel between classrooms.”

On the other hand, seventh and eighth graders could be given what Joynt called a “hybrid standard,” where they would still take electives like orchestra and art in the normal high school facilities but otherwise have a more middle-school like experience with, for example, no open lunch.

The third proposal would make Lake Bluff K-4, close Atwater, make SIS 5-7, and put 8th graders into the high school. The committee liked that this proposal would keep middle level students at SIS, “a building designed for middle schoolers,” as Sorenson said, and would thus result in less remodeling costs than the first proposal. Furthermore, with a savings of $534,881, this proposal is the most economical of the three.

Like the second proposal, however, the committee had concerns over whether eighth graders would be treated as full high school students or kept separate.

It was clear that the school board will be faced with a tough decision that could impact the April 6 elections, when board member John Carlton will face three challengers for his seat and one open seat. Sorenson pointed out that all of the current school board members’ children go to or did go to Atwater, and this could affect the board’s decision.

Debate at the meeting at times became heated as committee members struggled with finding a balance between community desires and financial realities while also encountering different priorities.

“800 grand is a lot to lose this year and next year and the year after that… after a while, it doesn’t matter where you went to kindergarten,” said Shorewood parent Rod Washington.

The committee was aware that the closure of any school, especially Atwater, would not be welcomed by the community.

“Every single scenario is going to [anger] somebody,” said Mary Gorman, Lake Bluff science aide and Shorewood parent. “There are going to be 50 people behind every opinion once we bring this to the board.”

“If anyone thinks that they’re going to get out of this without any pain,” Sorenson added, “leave the room now.”
Posted by JenHeyden at 10:05 PM No comments:

MUSIC: We are looking for 6 performers or groups to share the stage in front of the Drama Dept. steps! Would you like to play? This is the stuff dreams (and/or depending on your feelings about Shorewood, nightmares..) are made of! Come share your talents with the SHS Alumni family. Get a chance to come back and play on the lawn!

FOOD: We are engaging the Shorewood Men's Club to hopefully grill up a feast. We could have grills available for you to do your own food, however it works out. If you are interested in having a booth to sell food or anything for your group, please don't hesitate to ask.  This could be a great fundraiser to support Shorewood in all ways - PTO, Girl Scouts, you name it!

Email shorewoodalumni@gmail.com Subject: PICNIC! With your interest, and we'll try to get you in the play list!


Last year, the first inaugural picnic was held. Here are some photos (more coming soon) from that event! 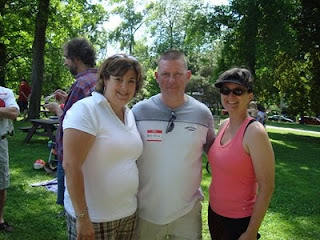 Posted by Shorewood High School at 11:04 AM No comments:

A popular restaurant for Shorewood alums, last known on January 19th as the Pizza Man restaurant, located on the corner of Oakland and North Avenue in Milwaukee, burned in a four-alarm fire. The blaze completely gutted Pizza Man and the rest of the building, which also included a nightclub, two other restaurants, and ten apartments on the building’s second floor.

Luckily, all of the apartment’s residents were evacuated, and no one was hurt. The building, however, has already been torn down.

Although it stood outside the Village of Shorewood, its nearly 40-year run since opening in 1970 made a huge impression on Shorewood students and alums. After soliciting for Pizza Man memories on Facebook, I learned that it was a popular hangout for Shorewood seniors in the 1970s to enjoy pizza and pitchers – since the drinking age was 18, after all. In later years, it played host to many pre-homecoming dinners, post-musical rehearsal snacks, and philanthropic events too, including a yearly benefit for Camp Heartland organized by Shorewood students in the 1990s.

Fans of the restaurant were able to get a piece of Pizza Man before demolition – literally – as de-construction crews allowed former patrons to take bricks from the building as crews helped to tear it down. For now, those will remain as the only memories of the fallen restaurant, but the restaurant’s owners say they’ll be back creating more Pizza Man memories soon. Mike and Deanna Amidzich, who owned Pizza Man since 1970, have said they plan to re-open, likely on a new site. Although they haven’t confirmed one yet, speculation continues to grow on where they will re-open.

Posted by Shorewood High School at 1:52 PM No comments:

If you are interested in setting up a tour for your Reunion or group that may be coming through the area or considering a donation, please call Jenny Heyden, SHS Alumni President, at 414-534-6287, or email the SHS Alumni Association at shorewoodalumni@gmail.com.
Posted by Shorewood High School at 10:37 PM No comments:

Greetings, SHS Alumni. The entire family of Steve Berg, Class of '84, and the Shorewood High School Alumni Association would like to announce a memorial collection for Volleyball Equipment at Shorewood High School. The goal is $5,000, and donations will go towards a new and much-needed set of volleyball standards, nets, and balls for the school.

Your donation will help the Volleyball Program - which as many of you know was something Steve enjoyed while at Shorewood. Please send donations to the Alumni Association, c/o Steve Berg Volleyball Memorial, P.O. Box 11427, Shorewood, WI 53211, or click the Donate button on this blog, and designate your donation for Steve Berg.

If you have any questions or would like to share memories or other thoughts, please do not hesitate to post a blog, or contact me, Jenny Steinman Heyden, SHS Alumni President.
Email shorewoodalumni@gmail.com
Also, there is much happening on Facebook at the Shorewood High School Alumni Group, or http://www.facebook.com/#!/group.php?gid=13686802297&ref=ts

Take good care, and hope to hear from you.
Posted by Shorewood High School at 10:31 PM No comments:

Planning a Reunion? Want to find out if someone already is doing this for your class?  Contact us at shorewoodalumni@gmail.com to help spread the word about your reunion, help with class lists,  organizing tours of the school, joining the 4th of July Parade, or coordinating with the All-Class Reunion Picnic on 7/10 for 2010!