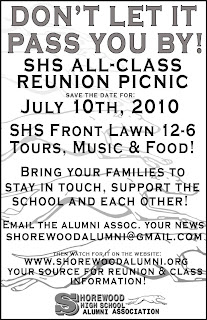 Posted by JenHeyden at 4:48 PM No comments: 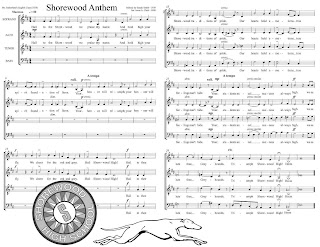 Posted by JenHeyden at 12:27 PM No comments:

Barbara Gensler wants a Costumer for the Drama Department

Put it this way. I met with Barbara Gensler, THE Barbara Gensler, at City Market today at 10am. She had tea. She looked powerful, and I was suddenly mindful of my posture. Let me say she knows all your names and would recognize you immediately if she ran into you. She made my head spin with all the names and class years and shows and who buys tickets and who of you went on to do what, especially in theater or costumes, after Shorewood.
All she wants, and let me tell you she pays for a lot of things on her OWN, is for the costumer position to be saved. "One more year," she says, "I will stay one more year if I can just keep a costumer. A sewer (meaning Mary Kay Anderson who has been reallocated for 7th period to teach sewing) is different, and we have all these kids after school, we need a costume department. We need a costumer to make this the Shorewood Drama Department that I have given my whole career to run."

If the Alumni were to donate money, tax deductible, she could present a check to the superintendent for $15,000, and in her mind, save Drama at Shorewood.

I think we can do this. There are more things, there is a wish list, a drama endowment in the works, focused fund raising on things like a scrim, a feeder drama teacher, and more, and we'll work on all of it. Right now, we can change Barbara Gensler's life. Her new office has four giant electrical boxes outside the windows that hum and make her feel sick. She is fighting breast cancer. She went to Kenosha and directed a show that was just chosen for a National award and recognition - but she feels guilty and wants to only serve Shorewood.

Right now, at City Market, she is completely clear on this and will make the other things work, but she needs a Costumer. Can you help?

Below is a link to the Paypal Account that is just for this purpose. If you click the drop-down menu, there are other amounts and my attempt to be heartfelt, witty, and direct about the amounts of money. Please if you would like to donate a different amount, do not feel as if there are any rules or minimums. We are all together on this, and every effort helps.

Barbara Gensler, 1AM, Message received via Facebook from Barbara on Sunday night, 3/22/10.

"I am overwhelmed with this message [sent by me to set up a meeting to inquire about her immediate needs regarding Drama Dept]. You may know that we are losing our costumer for the second time in 2 years. Last year we gave up our freshman acting teacher and with the help of a few wonderful alumi and parents kept the great person that we have now but this year she has been cut again and I have nothing to bargain with.
I would love to meet. Name the time and place. I am involved with Les Miserables between 3 and 6:30 but can get away.
Thank you. barb gensler"

Alumni Les Miserables Night will be Saturday, MAY 8, 2010. Tickets available soon via the website shorewooddrama.org!
Posted by JenHeyden at 1:23 AM No comments:

1. You graduated in 1976. What was Shorewood High School like then - what memories of the regular day-to-day life do you have of coming to school here?

I just remember how cool it was to go building to building, between classes, in high school!

What clubs or extracurricular activities were you in at Shorewood?

I was very active in Shorewood Ripples, became the editor middle of senior year. I got elected to student council and I don't know how during senior year.

2. What were some of the unexpected things that you feel maybe influenced you the most?

Everything was unexpected! I was in high school! I guess one thing that was unexpected -- and looking back, knowing other friends' experience of high school, not that common -- was really, how much room there was to move from group to group. I'm not sure I appreciated it at the time; how could I, with no other experience. But in the years following, and certainly at our 20th reunion, it was really remarkable how jocks hung out with drama club kids, who hung out with scholars, who hung out with freaks, who hung out with cheerleaders, etc. When our high school quarterback (and basketball center) Gary Morrison died, way too young, in 2006, it really caused a lot of us to reflect on how Gary was part of the way people moved between groups. In movies and legend, jock stars in his role were at the high school pinnacle and set a tone of putting down everyone else; he was friends with kids in every group, and that helped set a very different tone.

3. Where did you go after leaving this fine school - college, major, college again, next major?

I got a BA in history at UW-Madison, a great experience that built on my Shorewood years (lots of friends went too). Got a job at a paper in SB thanks to Madison graduates, never went back to grad school though I'd planned to (at least, not yet!)

Came aboard in '98, three years after founding. But I was the first news editor, so I was part of realizing the Web was going to be about news, more than cultural commentary.

5. Tell me you owe all of your entrepreneurial spirit and wisdom to your high school years at Shorewood.

I really do owe my love of journalism to Michael Huth, the sponsor of Ripples. He sent me out on a story on Title IX, which established funding for women's athletics, when I had no idea what it was. And I still (not often enough) read poetry because of Mr. Huth.

6. Is there anything that you would say you hope is still happening at Shorewood High School?

I would hope there is still the spirit of mixing between groups.
Posted by JenHeyden at 10:24 PM No comments:

There has been some interest expressed about getting Alumni connected in different parts of the country!  If you would like to be an Alumni Group Leader, please come forward. Shorewoodalumni@gmail.com
Posted by Shorewood High School at 6:14 PM No comments:

This past year, Shorewood Alumni Association has prepared for growth by securing relationships within the High School and Community, and reaching out in new ways. It has made a concerted effort to make only targeted expenditures to connect with SHS and the community, while gearing up for long-term savings and endowments in the near future. Your donation to the SHS Alumni Association is not only appreciated, but directly connects your past with the future. Whether your donation is for annual membership, in honor of one of the memorial funds, or is for a coming endowment for drama or another area you specify, we are committed to making sure 100% of your donation is used toward that purpose.